Please enter your email address to receive your personal one-time use unique coupon code - $100 off $1000:

Which jewelry you should buy for each anniversary year and why

We are reader-supported. Buying through links on our site may earn us commissions. Learn More.

We are reader-supported. Buying through links on our site may earn us commissions. Learn More.

Whether you’re celebrating your 10th, 20th or just your first anniversary, an anniversary ring can be the perfect way to mark and remember your special milestone.

What is an Anniversary Ring?

An anniversary ring is a ring that symbolizes a milestone in the marriage and is usually a band with many diamonds or gemstones. Anniversary rings are most commonly gifted at major anniversaries, like 5, 10 and 20 years, but can be given at any time. They symbolize a lifelong bond and the joys the couple has experienced together.

The right anniversary ring commemorates the time, love and memories shared by you and your partner. It’s a unique memento that’s completely yours — a piece of jewelry that signifies how far you’ve come and what you’ve accomplished together. This 10 year anniversary band from Blue Nile is a perfect example of a stunning ring that represents a decade of love.

Just like buying the right engagement ring, choosing the right anniversary ring for your partner can be a serious challenge.

Below, we’ve covered everything you need to know about shopping for an anniversary ring for your partner (or a matching set for the two of you). We’ll walk you through:

We’ve also listed example rings, earrings and other jewelry for every anniversary year to help you choose the best options, regardless of how many years of marriage you’re celebrating.

When Should You Give an Anniversary Ring?

There are no set rules on giving anniversary jewelry, meaning you’re free to gift your partner an anniversary ring or other jewelry whenever you feel like it. 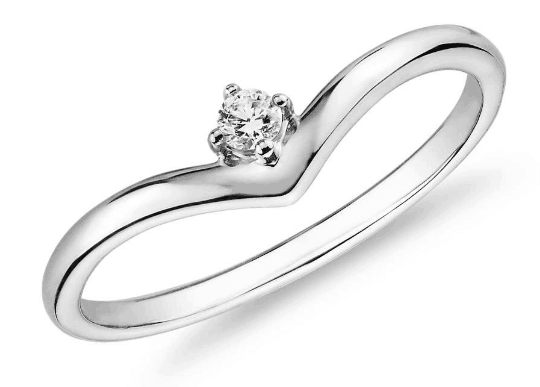 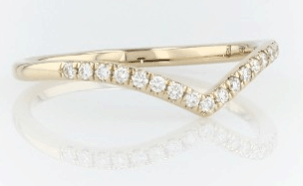 For 1 year anniversary rings, it’s traditional to exchange gold jewelry. Most couples opt for a simple gold stacking ring, or a matching set for him and her.

Congratulations on celebrating 10 years of marriage! For your 10 year anniversary ring, it’s customary to give a diamond anniversary band, which your partner can stack alongside her engagement ring and wedding band. 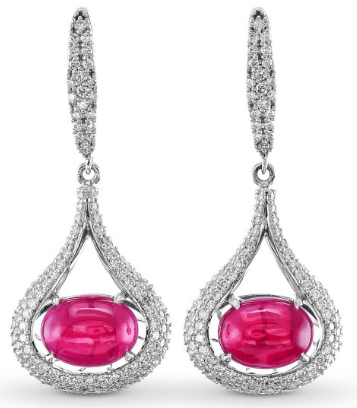 Throughout the ages, rubies have long represented love and passion, making ruby jewelry an excellent choice for your 15 year anniversary ring. Rubies look fantastic set in yellow gold and silvery metals, particularly alongside other precious gemstones in an anniversary band.

Recommended: These gorgeous Ruby and Diamond Drop Earrings from Leibish.

Your 20th wedding anniversary is a major milestone — one that deserves an equally special and rare gemstone. Emerald is the traditional gemstone for 20th anniversary rings, with a stunning green color that adds style and sophistication to any engagement and wedding ring set.

As you begin to move towards your silver, pearl and golden jubilees, anniversary rings change from being a fun, friendly gift into a special symbol of your love, memories and commitment to each other. 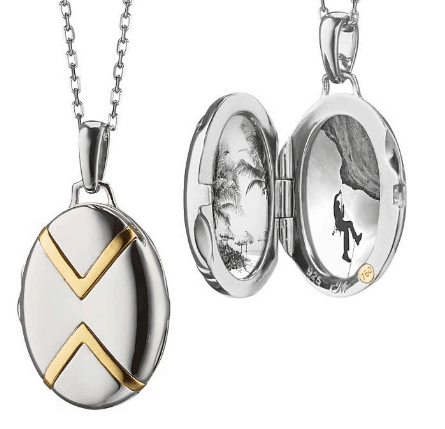 Your first major celebration, your silver jubilee marks 25 years of marriage. As you’d expect from the name, the focus here is on silver. A silver sterling band with your partner’s favorite gemstone can be the perfect gift here, especially if it matches their engagement and wedding rings.

Recommended: Any silver jewelry is a good choice for this anniversary. Blue Nile offers a wide range of sterling silver pieces, from timeless pendants and lockets to bracelets, silver earrings, engravable silver gifts and more. If you’re looking for a 25th anniversary ring for your wife, consider a classic luna diamond ring that resembles silver. 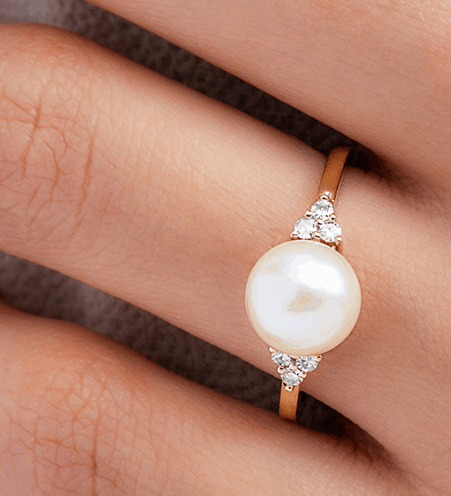 Pearls are a traditional gemstone for your third and 30th anniversaries, making this date a great time to consider a pearl stacking ring for your partner. Both cultured and natural pearls can look fantastic, particularly when set in yellow or rose gold.

Recommended: Looking for a 30 year anniversary ring? This beautiful 14k Yellow Gold Freshwater Pearl and Diamond Trio Ring from James Allen will be a good inspiration for you. 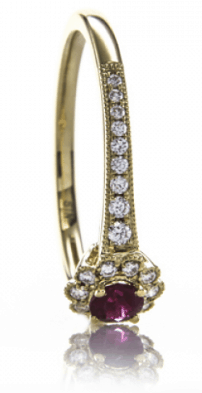 The traditional gemstone for your 40th wedding anniversary is another repeat, this time of your 15th. Known as a symbol of passion and love, a yellow gold or silver-colored ruby anniversary ring is a classic 40th anniversary gift that’s sure to impress (look at the gorgeous halo setting in yellow gold with a ruby center from Brian Gavin on the right). 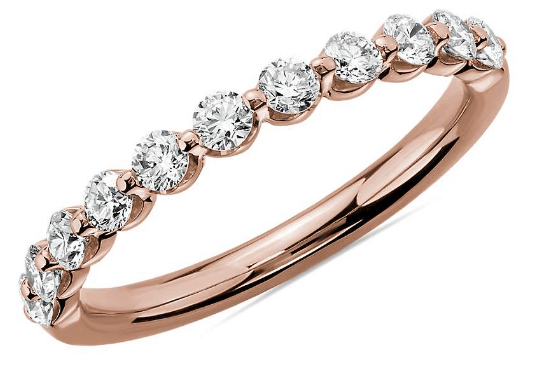 It’s called your golden jubilee for a reason — this important milestone is the perfect opportunity to commemorate your love with gold jewelry. 50th anniversary rings range from yellow gold to rose gold, usually with inset diamonds and other gemstones.

How to Choose an Anniversary Ring

1. Opt to Match or Contrast Other Wedding Jewelry

Consider whether you’d prefer a complementary or contrasting ring. A complementary ring has a similar design to your partner’s engagement and wedding rings. This gives them the option of wearing their anniversary ring on the same finger as part of a matching set.

A contrasting ring features gemstones or precious metal that contrasts with your partner’s engagement and wedding rings. For example, maybe their 20 year anniversary ring features an emerald, while their engagement ring and wedding band has diamonds. Normally, your partner will wear their unique anniversary ring on a different finger or hand than their other wedding jewelry.

2. Choose Your Gemstones and Precious Metal

Check that your partner likes the specific metals or gemstones recommended for each anniversary year. This can be as simple as asking your partner about their favorite gemstones, or taking them window shopping for jewelry and observing their comments.

There are no absolute rules when it comes to anniversary rings, meaning you don’t need to choose the recommended gemstone or metal for each year. You can select an entirely different gemstone and style than the traditional option.

Overall, it’s best to stick with a style that you know your partner will like. If a specific metal or gemstone has sentimental value to you, there’s nothing wrong with choosing it instead of a traditional choice.

Consider taking your partner shopping with you. Surprises aren’t always expected with an anniversary ring. By shopping together, you’ll be able to find the best option for the two of you, whether it’s a single anniversary ring for her or a matching set for both of you.

Need expert help choosing the right anniversary ring? Send a message to our experts and we’ll get in touch with personalized advice on the best rings for your partner and you.

So what finger do you wear an anniversary ring on? There isn’t a rule, but most commonly, people wear their anniversary ring on their right-hand ring finger (next to their pinky). This allows the anniversary ring to stand out without distracting from the beauty and original design of their engagement and wedding rings.

Best Anniversary Rings & Bands for Her

The best anniversary rings and bands match her personal style and are a symbol of how much she means to you. There are a variety of designs to choose from — from bands with many diamonds to simple rings with gemstones. Here are handpicked recommendations to complement a variety of styles.

James Allen James Allen is the leader in online diamond sales. Their imaging technology is the same as inspecting a diamond with a jeweler's loupe. They have the largest exclusive loose diamond inventory online and fantastic prices. They also have the nicest collection of lab created diamonds online. Save 25% on studs and earrings! and  Save 10% off Lab Created Diamonds during limited time sale!
Click to Visit
What we love about them:

Blue Nile Blue Nile is the largest and most well known internet jewelry seller. They have a very large exclusive online inventory. Their high quality images are catching up to James Allens' and their prices are amazing. Blue Nile have generously offered our readers an exclusive one-time use coupon. (Click Here to save $100 off engagement ring settings)

Please enter your email address to receive your personal one-time use unique coupon code - 15% Off:

Please enter your email address to receive your personal one-time use unique coupon code - 15% Off: